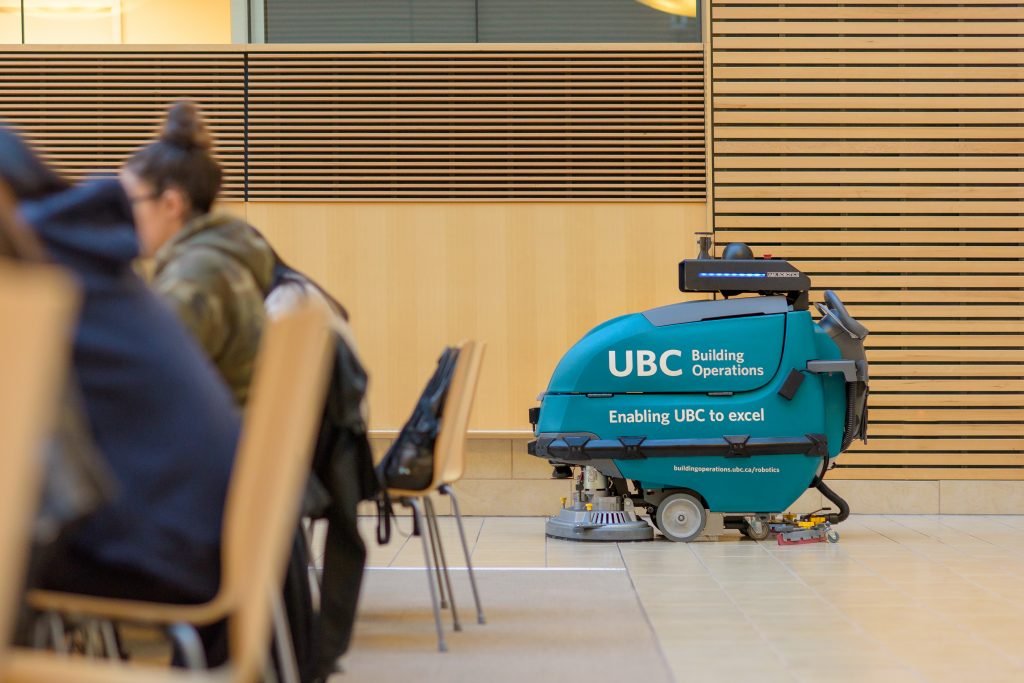 A partnership between the University of British Columbia and an innovative robotics company led by three UBC graduates is bringing seven artificially intelligent floor-cleaning robots to UBC’s Vancouver campus.

The intelligent navigation system developed by A&K Robotics transforms manual cleaning machines into self-driving robots. UBC Building Operations staff will train the machines to clean the very floors the company’s founders once walked as students. This will give custodial staff time to focus on more detailed cleaning, and spare them the physical demands of manually operating floor cleaners, which can weigh up to 386 kilograms.

“We have a long history of using our campus as a living lab, and taking opportunities to use university operations and infrastructure to demonstrate new technologies,” said John Metras, UBC’s associate vice-president of campus facilities. “This is exactly the kind of partnership we like to have, where we take UBC-developed technology and use it on campus, helping UBC-initiated companies become successful.”

UBC Building Operations worked with A&K to develop and trial their product, providing campus buildings and operational expertise culminating with a successful three-week pilot program in May. Staff adapted quickly to the floor-cleaning robots’ user-friendly interface. The pilot not only led to the UBC deal, but has also now resulted in contracts for A&K with Vancouver International Airport, and clients in the U.S. and Europe. The automation module developed by A&K Robotics is mounted on top of an automatic floor cleaner to create the robotic floor scrubber.

“This deal with UBC is very important for our company,” said A&K Robotics CEO Matthew Anderson. “UBC is well respected as an organization that uses the best, world-class technology. People who work in custodial and building operations know that UBC is a top employer and they want to work there. That is really valuable for us, because it means we are working with one of B.C.’s leading organizations in this field.”

Anderson studied commerce at UBC in the mid-2000s, when he met English literature major Jessica Yip, who is now A&K Robotics’ chief operating officer. In early 2015 they teamed up with Anson Kung, a mechanical engineering grad and the company’s chief technology officer, to launch the company through entrepreneurship@UBC.

Entrepreneurship@UBC, part of Innovation UBC, provides support and industry mentorship for startups at the university as they generate new ideas and solve problems for the marketplace. In the case of A&K Robotics, collaboration with the university itself was a natural fit.

“It comes down to what problem the company is solving,” said Blair Simonite, program director for entrepreneurship@UBC. “If they’re solving a problem that UBC has, then I think it makes sense for the university to support the people it has trained, and invite them back to solve problems at the university.”

The company, which also got support through HATCH, UBC’s on-campus tech incubator, began with three people less than four years ago. It now employs 15 full-time and several part-time staff. Eighty per cent of them are UBC engineering graduates.

“It’s really incredible to be coming back to the university now, with a team that’s substantially larger, and with robots that are basically our first commercial product,” said Yip. “Coming back to our school and seeing different units at UBC come together to push for this is incredibly exciting and fulfilling.”

Two of the robotic floor cleaners are already in use at UBC’s Henry Angus and Life Sciences buildings, with five more scheduled for delivery in November.