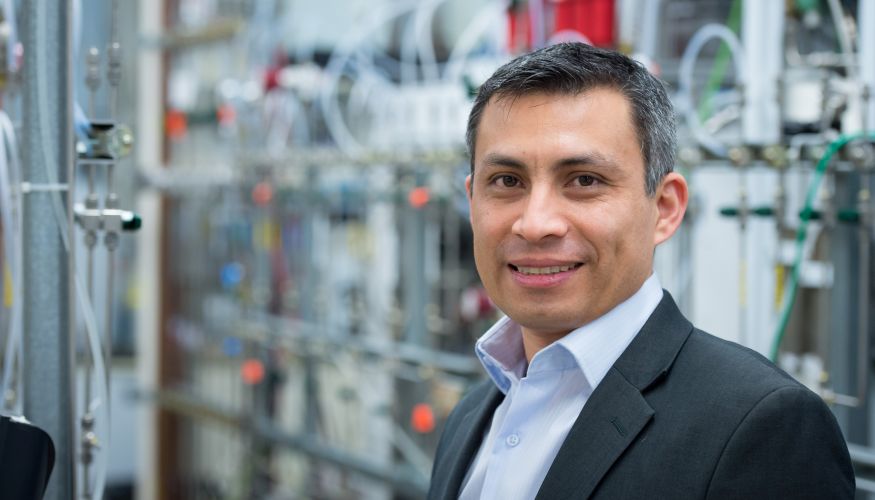 Walter Merida, a professor of mechanical engineering and associate dean of research and industrial partnerships at APSC, is featured in the latest issue of The Campus Resident, a publication of the University Neighborhoods Association.

In his "Letter from UBC President" column, UBC President and Vice-Chancellor, Professor Santa J. Ono highlights a recent conversation he had with Merida on his podcast. The episode, titled "Living Lab", explores "how UBC experiments with itself — with its buildings, its operations, and its surroundings — to develop innovative green technologies."

The letter is reproduced below.

I’m proud to announce that UBC has been ranked first in the world in university climate action and first in Canada (third in the world) for sustainable cities and communities in the first ever Times Higher Education World University Impact Rankings. UBC was singled out for its “research on climate change, use of energy and preparations for dealing with consequences of climate change.” UBC also placed 8th in the world in partnership for goals, 13th for industry, innovation and infrastructure, 39th for good health and well-being and 71st for quality education. (You can find the article online at https://bit.ly/ubc-sustain2019.)

UBC’s recognition in these rankings is a clear reflection of the great work of our students, faculty, staff and campus residents who combine their expertise to ensure UBC is a leader in creating vibrant, sustainable and connected communities and campuses.

UBC was the first university in Canada to have a sustainability policy. We have since launched a number of projects on campus to improve energy conservation, climate change mitigation efforts, greenhouse gas reduction, and more.

As renowned social theorist Jeremy Rifkin mentioned at a UBC Connects talk last year, UBC has the opportunity to serve as a beacon towards positive change when it comes to smart cities, clean energy and sustainability.

UBC has been seizing that opportunity. We have been using the Vancouver campus as a “living lab” for exploring and testing out new environmental, social, economic and technological advances, some of which could be scaled up to move the needle on global sustainability.

We established some of North America’s most aggressive greenhouse gas (GHG) emission reduction targets in 2010 and have, despite a significant increase in student population and building growth, achieved a 34 percent reduction since 2007. UBC is on-track to reduce GHG emissions by 67 percent as of 2021, and targeting 100 percent by 2050.

Last month, I had the pleasure of talking about some of UBC’s sustainability initiatives with mechanical engineering professor Dr. Walter Merida in my podcast series (www.blueandgoldcast.ca).

Professor Merida predicted that UBC may be the first place where hydrogen refueling infrastructure, solar energy, and other sustainable structures are gathered in one city block.

He mentioned that one plan is to transform the parking garage across from the UBC Skatepark on Thunderbird Boulevard into an eco-friendly structure.

“We are going to take this parking building, and we are going to add an array of solar panels on the roof, not necessarily because solar energy makes a lot of economic sense in BC at 4-6 cents per kilowatt hour, but because we are working on the high-voltage conversion hardware to take renewable electricity and connect it to smart grids,” he told me in the podcast.

Another project in the works is the production of synthetic fuels from carbon capture.

“It is very difficult at the moment to generate chemical fuels cleanly,” Professor Merida said. “We can generate clean electricity from a number of sources — solar, wind, hydro — but energy is more than just electricity.”

Our research will not only benefit UBC and its neighbourhoods, but people everywhere.

As Professor Merida noted: “The fact that we can explore solutions at the city scale makes our research transferrable. Projects we are working on at UBC could potentially be cloned, if you like, in many cities around the world.”

But time is running out. The clock on the need to get sustainability initiatives off the ground is ticking.

“We moved from coal to oil to gas, but it’s taken about 100 years to make each of those transitions,” Professor Merida told me. “The challenge we face is that we don’t have 100 years. The latest reports tell us that we need to make things happen in 30 years. This is why universities can play such a critical role.”

“We have places like the Clean Energy Centre. We have the sustainability initiative. We have a lot of ingredients to provide expert advice in some of these challenges. We have a very good opportunity to lead the way into the new low-carbon economy.”