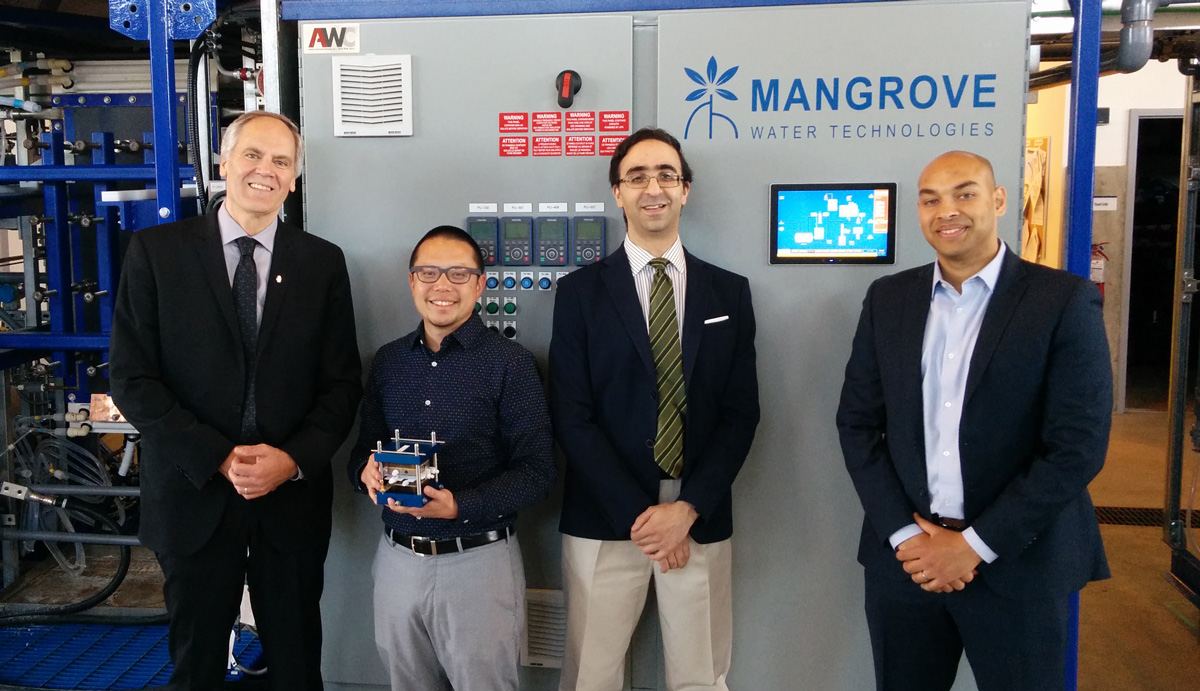 Formed by UBC engineering professor David Wilkinson and members of his research group at the Clean Energy Research Centre, the company will receive $5 million to help commercialize an electrochemical reactor that converts carbon dioxide and saline wastewater — harmful byproducts of the oil and gas industry — into value-added chemicals and reusable water.

Mangrove was named a joint winner of the competition alongside Nova Scotia-based CarbonCure Technologies, which was awarded $5 million to commercialize carbon utilization innovations in the cement and concrete sectors.

“We are grateful for the support of Emissions Reduction Alberta and our partners during this challenging yet immensely rewarding journey,” said Wilkinson. “As we continue to optimize the technology and build a viable business venture, we look forward to playing a role in reducing greenhouse gas emissions around the world.”

Easy to operate, transport and scale to industrial levels, Mangrove’s modular technology offers an economical alternative to conventional desalination and CO2 removal processes. In Alberta alone, it is expected to help save more than 11 billion litres of water (equivalent to 4400 Olympic-sized swimming pools) and reduce greenhouse gas emissions by 1.4 million tonnes CO2e (equivalent to the annual carbon emissions from over 300,000 cars) each year.

After being selected as one of four winners of the second round of the competition in 2017, Mangrove demonstrated the commercial potential of their technology at the Annacis Island Research Centre in Delta, B.C., where the company is operating a pilot plant. The latest version of their reactor will soon be commercially demonstrated at a Canadian Natural Resources Limited site in Alberta.

The former vice president of research and development at Ballard Power Systems, Wilkinson joined UBC’s Department of Chemical and Biological Engineering in 2004 as a Tier 1 Canada Research Chair. He co-founded Mangrove together with Saad Dara, the company’s CEO and a PhD student in Wilkinson’s lab; Alfred Lam, Wilkinson’s first PhD student at UBC and now a vice president at Chrysalix Venture Capital; and Arman Bonakdarpour, a UBC alumnus and research associate in Wilkinson’s group.

Emissions Reduction Canada announced its Grand Challenge winners at the SPARK 2019: Carbon Positive conference, which took place in Edmonton from October 28 to 30.