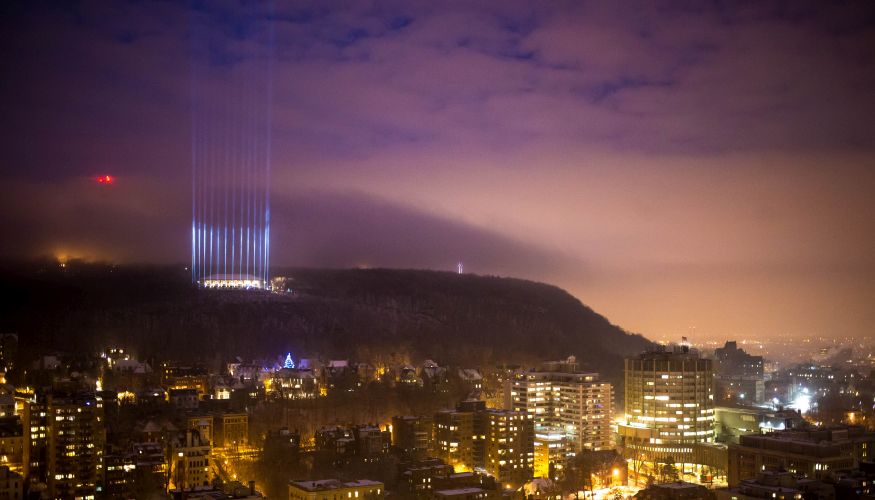 Earlier this afternoon, members of the UBC community gathered at the Chan Centre for the Performing Arts to commemorate the 30th anniversary of the École Polytechnique massacre, in which 14 women — 13 students and one school administrator — were murdered by a gunman claiming to be “fighting feminism”.

In addition to paying tribute to those killed and injured at the engineering school on December 6, 1989, the memorial event aimed to highlight the significant contributions female engineers have made to society and to inspire attendees to help promote peace, respect and equity in their daily lives.

Attendees then participated in a coast-to-coast “Beam of Light Ceremony”, broadcast live on the CBC, where a beacon was lit at each of 14 participating universities across the country and 14 beams of light were projected two kilometres into the sky above Mount Royal in Montreal. As each beacon was lit, the name of one of the victims was spoken.

Intended to serve as a powerful visual symbol of the lives lost, the beacons also represent hope for the future — one where people across the nation stand in solidarity against gender inequality and gender-based violence, and where diversity and inclusion are valued and actively advanced across academia, industry and society more generally.

The murder spree at École Polytechnique remains the deadliest mass shooting in Canadian history. It led to the establishment, in 1991, of December 6 as the National Day of Remembrance and Action on Violence against Women and sparked vigorous discussions about a host of other issues — gun control, hate crimes, mental health and child abuse among them — that continue to this day.

After a minute of silence, the ceremony on Mount Royal concluded with a choral performance of the songs “Aimons-nous” by Yvon Deschamps and “Alleluia” by Leonard Cohen and the placing of 14 white roses under a photo mosaic of the women killed in the attack.