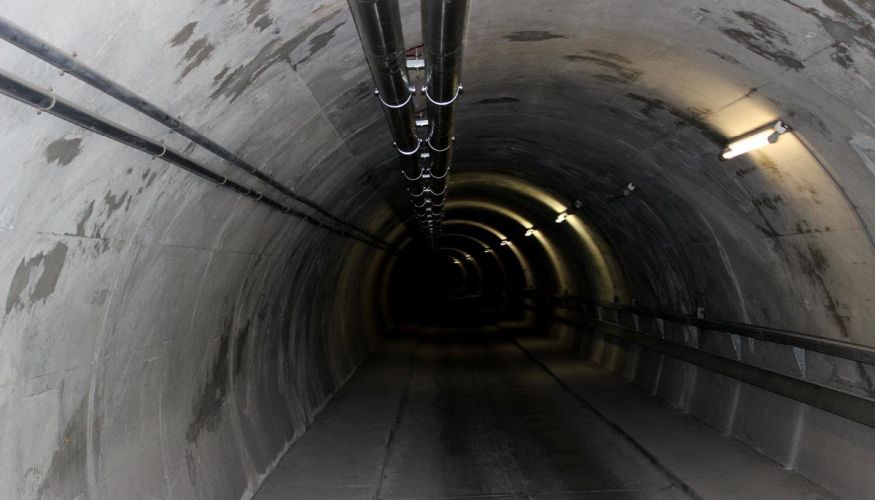 A Cold War-era nuclear bunker buried 500 metres below the countryside in southern France hums with new life today as an epicentre of vital research in science and technology.

The facility, built in the 1960s to house the nuclear command centre of the French air force, was decommissioned in the late 1990s and converted into a unique research lab that now draws scientists from around the world, including researchers from UBC.

Known as the Laboratoire Souterrain à Bas Bruit (LSBB), the lab is located deep in the Luberon Regional Natural Park, more than 20 kilometres away from heavy industry, major traffic routes and other sources of mechanical and acoustic noise and pollution.

“The LSBB lies in the heart of one of the last areas of great electromagnetic calm, providing scientists with one of the quietest underground laboratories in the world,” says Dr. Stéphane Gaffet, director of LSBB.

UBC researchers like Dr. Guy Dumont and Dr. Matthew Yedlin have done some of their work at the lab, which is operated by the French National Centre for Scientific Research (CNRS) and Avignon University.

Dr. Dumont, a UBC professor of electrical and computer engineering, studies the brain’s electrical activity. He’s particularly interested in gamma waves, which are associated with large brain network activity and are linked to various cognitive processes, pain perception and certain pathologies like depression and even autism.

He is using the lab for experiments in measuring brainwaves and testing EEG equipment. “The EEG results we got were mind-blowing. We’d never been able to obtain such clean EEGs in a hospital setting.”

Dr. Dumont has developed a novel EEG approach that he will be testing further at the lab once COVID-19 restrictions ease up.

Dr. Yedlin, an associate professor of electrical and computer engineering at UBC, is leading a project that takes advantage of the lab’s underground location to study the impact of climate change using variations in the water table.

This research started in 2007 and uses a special ultra-wideband antenna developed at the University Côte d’Azur (formerly University Nice Sophia Antipolis) that can penetrate the subsoil and produce clear images, including the presence of water.

“I’m excited by the possibilities of expanding this work, together with my colleagues in our interdisciplinary team of geophysicists, electrical engineers and hydrologists,” said Dr. Yedlin.

UBC’s connection to the LSBB goes back more than 15 years. Today, a new agreement signed by UBC, CNRS and three associated French universities (Avignon University, University Côte d’Azur and University of Pau and the Adour Region) formalizes the relationship and deepens the collaboration.

The agreement creates the Maxwell-Berger Underground Research Laboratory, which will focus on strengthening existing joint research on:

The lab is named after James Clerk Maxwell, a 19th century physicist whose work predicted the existence of electromagnetic waves, and Hans Berger, a German neurologist who is considered the father of electroencephalography.

“Together with UBC in Vancouver and our three partner French universities in Avignon, Nice and Pau, we are happy to officially launch an ambitious interdisciplinary research project, the Maxwell-Berger Low-Noise Underground Research Laboratory, which brings together medical science and geophysics, based on activity of brain and Earth which is measurable through electrical and electromagnetic fields. I am glad to see that scientific dynamism of CNRS research teams generates international collaboration and develops potential applications with prestigious university,” says Dr. Antoine Petit, chairman and chief executive officer at CNRS.

“International collaboration is more important than ever — both now and once the COVID-19 pandemic is over. UBC’s new global engagement strategy emphasizes multistakeholder partnerships to address issues of global relevance, and French institutions like CNRS are an important part of this. The Maxwell-Berger Low-Noise Underground Research Laboratory represents another milestone in this relationship, and I congratulate everyone who worked to make it happen,” says Prof. Santa J. Ono, UBC president and vice-chancellor.

“Today’s event highlights the long-lasting collaboration between UBC and the Embassy of France in Canada that contributes to the implementation of numerous scientific partnerships and student mobility programs,” said Mr. Philippe Sutter, consul general of France.

Canada has strong relationships with the French National Centre for Scientific Research (CNRS).

CNRS’s presence in Canada includes five international research laboratories — including the Pacific Institute for Mathematical Sciences, a consortium of 10 universities hosted at UBC — and multiple international research projects. Between 2015 and 2020, scholars associated with UBC and CNRS produced more than 1,900 publications, most of them in the STEM fields.

CNRS is working at expanding its collaboration with UBC beyond the existing fields of mathematics, biology, earth sciences and astronomy. CNRS is interested in working with UBC on issues related to climate change, in light of UBC’s work as part of the University Climate Change Coalition (UC3) and CNRS’s research activities and networks in this area.

A version of this article first appeared on the UBC News website.