The next generation of bionic devices 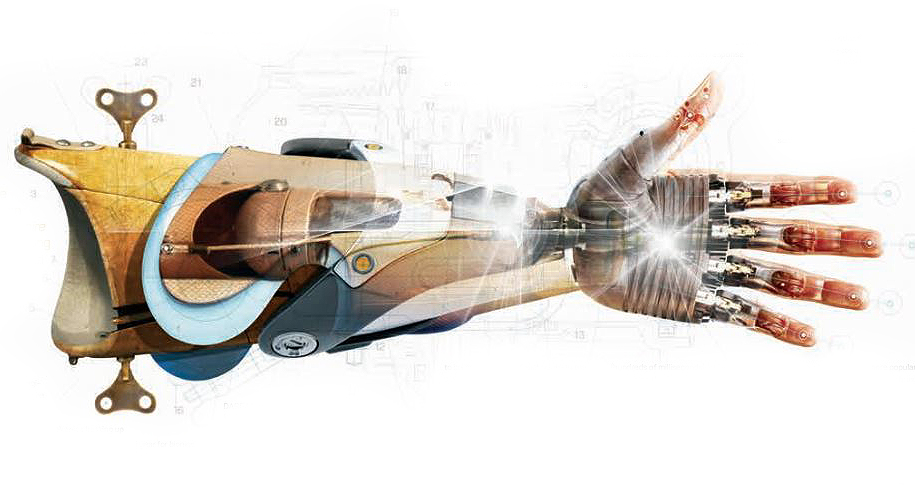 Inspired by the iconic scene of Luke Skywalker receiving an artificial hand in 1980’s The Empire Strikes Back, UBC is focusing on the future of bionics and the next generation of bio-integrated devices. [Illustration by Viktor Koen, all rights reserved]

Led by electrical and computer engineering professor Dr. John Madden, the newly-formed Bionics Network connects over two dozen principal investigators at UBC, Simon Fraser University and the University of Victoria, working in areas such as advanced prosthetics, rehabilitation robotics, regenerative medicine and 3D printed electronics. With specialties ranging across science, engineering and medicine, what brings these investigators together is a desire to deliver on the promise of bionics: the restoration or enhancement of human capabilities.

[Bionic: using artificial materials and methods to produce activity or movement in a person or animal]

2016 was a watershed year for bionics. July saw the foundation of Elon Musk’s new company, Neuralink, which coincided with the launch of the US Defense Advanced Research Projects Agency (DARPA) ’s new Neural Engineering System Design program, both aiming to develop implantable neural interfaces. In October, the world’s first Bionics Cybathlon was hosted in Switzerland, with all the latest prosthetic technology on display. And climactically, in December, after nearly eight years of development, DARPA launched commercialization of its long-awaited, and optimistically-named, LUKE Arm. LUKE (Life Under Kinetic Evolution) represents the cutting-edge of commercial prosthetics: controlled by wireless sensors attached to a patient’s feet, the artificial limb has an anthropomorphic design and natural weight (around eight pounds), 18 degrees of freedom and a responsiveness of one to two seconds using electrical actuators.

Watching the LUKE Arm in motion is an inspiration to many. As one recipient, retired US Army Captain Artie McAuley, put it, “I’m getting to do a lot of things…I never thought I could. This has given me the opportunity to enrich my life.” And more changes are on the horizon. Brain-controlled neuroprosthetics are passing lab tests with flying colours, helping patients with locked-in syndrome to move objects using only their thoughts. Osseo-integration is also gaining traction, which provides more natural and greater control by attaching a prosthetic device directly to the patient’s bone. With this recent wave of new technologies, it may be tempting to believe we’re tantalizingly close to the spectacle of science fiction. But, as Madden puts it, “We’re still a long way from the technological superheroes we see on-screen.”

This year marks 25 years since the world’s first electrical limb, the Edinburgh Modular Arm System, was unveiled by David Gow. In that time, major advances have seen the production of softer, lighter, stronger and more life-like artificial limbs, leading to the LUKE Arm. However, the challenge of translating lab technology into better patient care is still as great as ever. Studies show that despite these major advances, up to 56 per cent of patients abandon the most cutting-edge electrical devices, opting instead to use simple mechanical systems, which they feel are more reliable and less complicated.

The complexity of the human arm and the challenge it represents is a true marvel. Not only does it have great agility, with 34 degrees of freedom (27 in the hand, seven in the arm) and the ability to manipulate a wide range of differently-shaped objects, but it also has fast twitch response (hundreds of milliseconds) and an average grip strength of around 100 pounds. In addition, the human hand contains over 17,000 nerves capable of detecting weight, firmness, shape, temperature and texture, feeding this information back to the brain via a two-way signalling network. And, if that wasn’t enough, the whole system is wrapped in a soft exterior suitable for human-to-human interaction.

How can bionics deliver on its promise?

The LUKE Arm would be indistinguishable from magic 50 years ago and it stands as a testament to how far we’ve come from Götz von Berlichingen’s sixteenth century mechanical hand. But there is much ground to cover in bringing artificial devices to life. “Translating our technologies into better patient care is the goal of the Bionics Network” says Madden. “This means working across boundaries to integrate teams and develop a new generation of devices that are softer, smarter and more sensitive.” For the Bionics Network, this will involve three key research themes: 3D printing to produce custom-fitted parts and reduce costs; soft robotics to exchange rigid components for softer, smarter materials; and bio-integration, to create devices that are compatible with the human body. Madden’s team at the Molecular Mechatronics Lab recently hit the headlines with the development of a soft artificial skin that can impart touch sensation to robots.*

At a time when bionics is more popular than ever, the Bionics Network is developing a network of scientists, engineers and clinicians to be at the forefront of this new generation of devices. By combining human biology, biomimetic design and the perspective of the patient, the group aims to deliver mobility, freedom and life back to many.

The Bionics Network is supported by UBC’s Vice President of Research and Innovation Office, in collaboration with the Institute for Computing, Information and Cognitive Systems (ICICS).