Rewriting the Future in Bioink 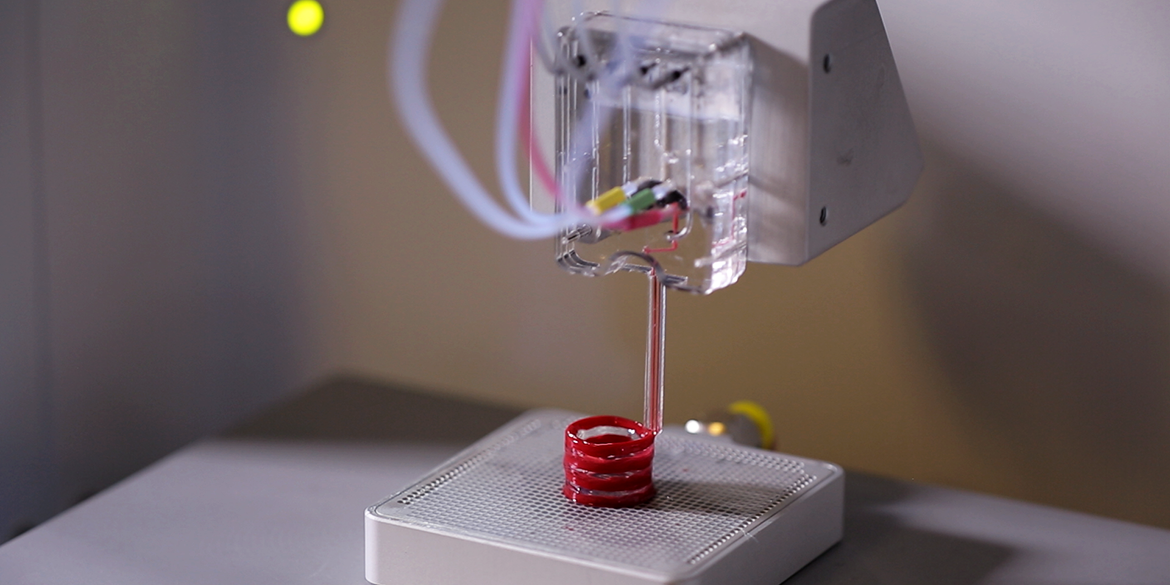 One morning in March 2006, eight men gathered in a hospital ward in northwest London. Young and healthy, they were there to participate in a clinical trial for TGN1412, an experimental arthritis and leukemia drug. At eight o’clock, the first patient was intravenously infused with either the drug or placebo. The others were infused at ten-minute intervals after that.

Within hours of infusion, the six men who received TGN1412 were screaming and writhing in pain. Within two days, they were nearly dead. The men experienced a range of adverse effects — from crushing headaches and nausea, to lung and muscle pain and severe breathing problems — that culminated in multi-organ failure. In stark contrast to its impact on mice and monkeys, the drug had triggered an inflammatory onslaught from which their bodies may never fully recover.

While experimental drugs rarely kill or harm people, cases like TGN1412 serve to remind us what a risky and costly process drug development really is. Nine out of every 10 drugs fail in human trials, despite having shown promise in animal models or the lab. And each one of those failed drugs costs an average of $200 million — not to mention years of effort by a small army of people — before their ineffectiveness is confirmed

This is partly why 3D bioprinting is one of the most talked-about scientific advances of recent years. By providing the ability to fabricate functional tissues, organs and possibly even entire biological systems in the lab, it has the potential to transform drug development. It may also allow regenerative medicine, personalized medicine and basic, translational and clinical research to progress more rapidly than ever before

One of the brightest spots in the 3D bioprinting landscape is Aspect Biosystems, a UBC a spin-off company co-founded by Tamer Mohamed and Simon Beyer, graduates of UBC’s Department of Electrical and Computer Engineering (ECE); Konrad Walus, an ECE professor; and Sam Wadsworth, a researcher at UBC’s Centre for Heart Lung Innovation. Building on a decade of microfluidics research conducted in the Walus Lab, they have developed what may be the most sophisticated bioprinting device on the market today

Powered by their Lab-on-a-Printer™ platform technology, the RX1™ Bioprinter enables researchers to create complex, highly customized tissues in a precisely controlled manner. This flexibility is attributable in part to the company’s proprietary tissue design and fabrication software, as well as special printheads the company has designed, which can combine different cell types, growth factors and other tissue components into cell-laden fibers and dispense these “bioinks” to print uniquely patterned 3D structures. Loaded with muscle cells from a donor lung, for example, the technology can fabricate a human airway that researchers can use to study bronchoconstriction and relaxation

Testing a drug on 3D-bioprinted tissues would provide important safety and effectiveness information before it is administered to live humans — potentially saving billions of dollars, decreasing reliance on animal testing and producing drugs that are better, cheaper and safer. It could also enable the design of customized medical treatments and the fabrication of replacement organs from a patient’s own cells, thereby avoiding organ rejection

Since 2016, Aspect has grown from eight staff members to nearly 30 and partnered with pharmaceutical and biotechnologies companies such as Johnson & Johnson. Already recognized as one of Canada’s most innovative companies, Aspect is on a path to remain at the forefront of this fast-growing and revolutionary field