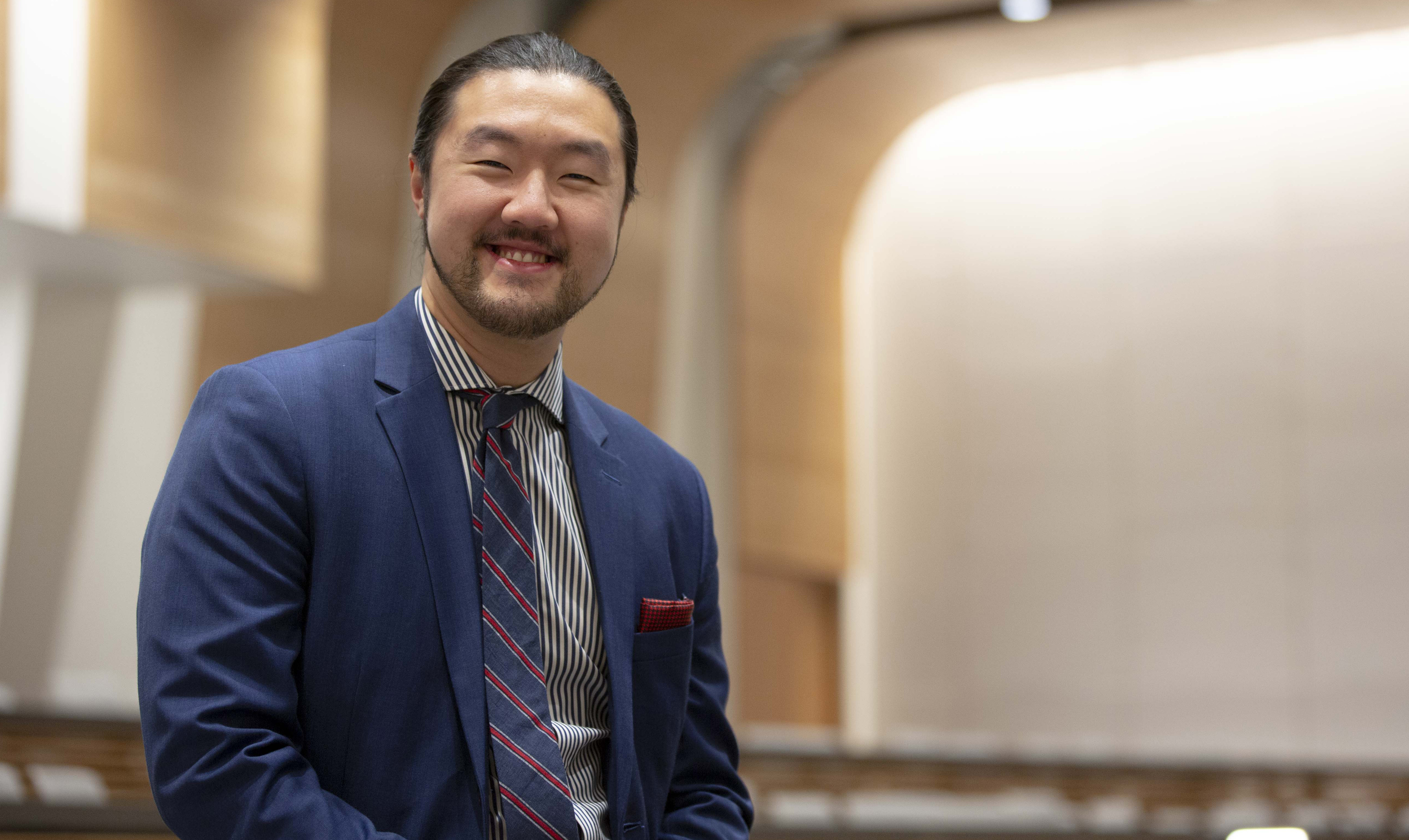 “The biggest thing I would have told my 18 year-old self is to never ever be afraid of making mistakes and failures in engineering. Those are the things that shape you into a better person.”

Terry Zhang hails from Shenyang, China, and lived in Niagara Falls, Ontario before moving to Nanaimo, and then Kelowna, to attend university at UBCO. As a civil engineering graduate, Terry has held various leadership roles in extracurricular groups on campus that affected many aspects of UBCO for students. He served two years on the UBC Board of Governors, where he oversaw the administration of high-level decisions for the property management, revenue, business and affairs of UBC. Terry has also served as Vice-President Finance and Vice-President External (consecutively) of the UBC Okanagan Engineering Society. As the Vice-President Finance, Terry supported a successful referendum to propose an annual student fee for engineering students which brought over $250,000 to the operating budget of the society since inception. During his tenure as a Vice-President External, Terry handled a budget of $26,000 while acting as a head delegate to represent UBCO at conferences hosted by regional and federal engineering student societies and chaired the sixth annual Okanagan Engineering Competition. Additionally, Terry was a Senator-at-Large for the UBC Okanagan Student Senate Caucus. He was the fundraising chair for Sigma Phi Delta fraternity and raised $800 for Breast Cancer Society of Canada and Movember Foundation to-date.

Why did you choose engineering?

When I was a kid, I loved rolling up big snowballs whenever it was snowing. It never failed that someone would always come along and help me push it to make it bigger. In the end, everyone went home happy. During these moments I’d say to myself, “This is what I want to be like when I grow up.”

Since then, I’ve always been active in environments where I could surround myself with others and achieve things together to create a positive impact. I feel joy when I go through life-changing experiences and moments with other people that can shape me into a better person.

As evident in the recent political landscape, especially in British Columbia, obstacles that impede engineering advancement are often politically-related, rather than a result of a lack in technological knowledge (e.g. hiatus on ridesharing and pipelines in BC). My ambition to become a civil engineer stems from my passion to build a better infrastructure for society while being the push that gets their snowballs rolling bigger than it’s ever been before.

What have you learned in engineering that is most valuable?

Throughout my five work terms with the UBC Engineering Co-op program, one of the most important lessons I’ve learned is that your ability to communicate with stakeholders (e.g. clients, contractors, employees) is crucial in making a difference for society. One of my mentors taught me that technical abilities can be learned with time, grit and effort, but interpersonal skills are learned through experience, failure and taking risks. I was grateful to have learned these communication skills at the School of Engineering, both inside and outside classrooms, through group projects and extracurricular activities.

What has been your most memorable/valuable non-academic experience studying engineering at UBC?

My extracurricular roles outside of the classroom walls at UBCO had a huge positive impact on my university experience.

Engineering Society allowed me to travel to many cities for conferences and competitions across Canada, and I met hundreds of like-minded engineering students at every Canadian university, so I’ll always have someone to call up whenever I’m travelling. I learned how to manage budgets and organize events with students, professors and engineering companies.

The Sigma Phi Delta fraternity showed me what brotherhood is, and taught me how to support and trust others, while relying on the value of strong support group to help you through tough times.

The UBCO Senate gave me perspective in the academic world at UBCO and became more understanding in academic decisions and processes from professors, post-graduate students and researchers who are the lifeblood of a university’s ability to enhance society.

The Board of Governors gave me immense insight on organizational governance, human resources management, endowment investments, property development, politics, government lobbying and everything beyond the expertise of a typical 22-year-old in university with knowledge of too many new acronyms and abbreviations to count.

What advice would you give a student considering engineering?

The biggest thing I would have told my 18 year-old self is to never ever be afraid of making mistakes and failures in engineering. Those are the things that shape you into a better person. I’ve had many areas in my time at UBCO where I failed and then succeeded through perseverance.

When I started out in the UBC Engineering Co-op program, I applied to over 200 jobs and received only one interview in my first co-op term; and I’ve gotten denied many times after hundreds of applications and interviews. By the time I was applying for my fifth co-op term, I had seven interviews after only 30 applications. Fast-forward to today, I’ve had the pleasure of working at five different companies and organizations in my co-op career, which allowed me the flexibility of choosing between competitive offers for my full-time job hunt.

After I failed a course in second year, I received a 97% in that course in my third year while taking a full course-load with six other third-year courses and having the highest semester average of my academic career. I’ve gotten rejected for many campus roles and club positions only to have leadership roles in many extracurricular positions like the Engineering Society and the Board of Governors which have all been extremely rewarding. Not to mention getting denied by many scholarships and awards I’ve applied and interviewed for while receiving the Engineers and Geoscientists BC (EGBC) Student Leadership Award in my final year.

What are your plans for the future?

I’ll be doing a backpacking trip with my close UBCO friends in Europe for the month of May. I also hope to receive my advanced scuba diving certification during the trip, likely somewhere south of France.

For work starting in June, I’m currently deciding between an offer to work in the local government in Vancouver and another with a private firm in Southern California, while waiting to hear back from a couple of other interviews. It’ll be a tough choice to make but I’m sure I’ll make the best of whichever opportunity I embark on.

In the future, I would love to work in a managerial or business-oriented role in the engineering world, focusing on marketing and sales in real estate or property development. This would be a great way to make use of my technical engineering skills with my passion for meeting new people and networking.

How will you go on to make a difference in our world?

The field of civil engineering world is fascinating, in that every decision made by a civil engineer affect hundreds and thousands of people in their everyday lives. A stop sign or a speed bump on the road can make a difference between life and death for a person. A new building can create dreams and opportunities for hundreds and thousands of people. Proper water and wastewater systems can mean clean water for a whole country. I hope to make this difference in the world knowing that one positive change I can make to at least one person can make a whole world of a difference to them.