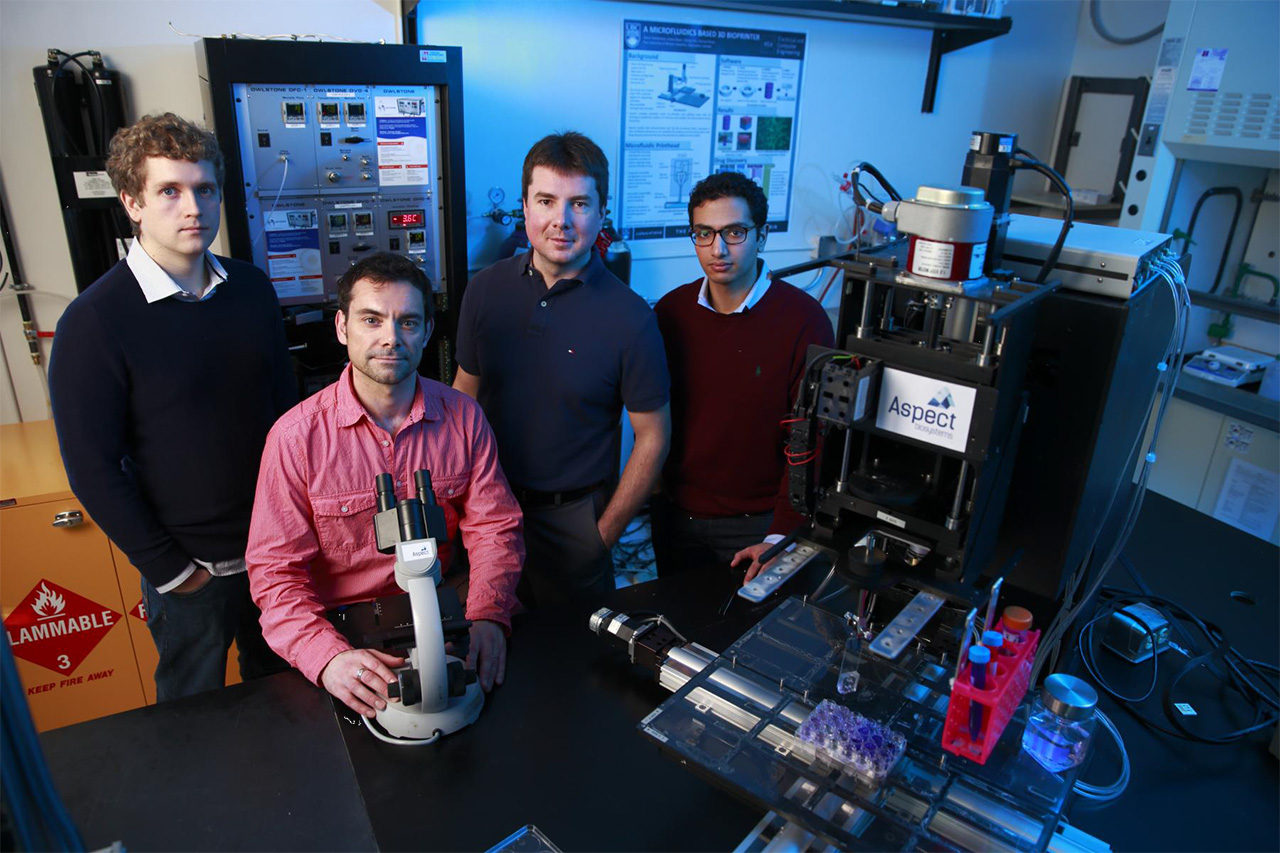 Electrical and Computer Engineering Professor Konrad Walus has been exploring unconventional uses for printers since 2006. Working initially with inkjet printers he developed in the lab, Walus established that living cells printed using this inkjet technology could not only survive the printing process, but resume their biological function over time. Walus then began contemplating the potential of 3D printers for recreating living tissue, patterning cells in layers, rather than the plastic materials used in conventional 3D printing.

To successfully “bio-print” 3D living tissue, however, would require extensive modifications to 3D printing technology, which Walus and his team of graduate students achieved supported by a 3-year NSERC Strategic Project grant. They could now replicate specific 3D human tissue constructs that when cultured in an incubator develop biological functions.

Walus and his team—including Aspect Biosystems Chief Scientific Officer Sam Wadsworth and former UBC ECE masters students Tamer Mohamed (Aspect CTO) and Simon Beyer (Aspect COO)—knew they had something special on their hands, and so decided to form Aspect Biosystems Ltd. in November 2013 to commercialize their research. Walus turned to the experts at enterpreneurship@UBC, who saw the potential of his work and suggested the Aspect team take the Lean Launch Pad (LLP) Accelerator program. The LLP requires participants to interview an exhaustive number of potential customers to establish whether their product or idea is commercially viable, then prepare a business model validated by the results. Walus and his team emerged from the program with an immediate focus for their company: working in partnership with industry and academia to develop tissue printing technology for drug testing and development.

“There are over 100 cures for airway fibrosis that work in a mouse that don’t work in humans.”

A New Model for Drug Testing

Developing a new drug can cost pharmaceutical companies up to $4 billion and take 10 to 15 years. Part of the reason for this exorbitant expense—which consumers eventually absorb—is that many drug candidates fail; in fact, up to 90% of new drug candidates don’t make it to market. Also, preliminary testing is done on cells in small petri dishes in a 2D environment, where many disease mechanisms are not expressed as they are in humans. In addition, 2D cell models do not properly reproduce the function of human tissue, which is naturally three-dimensional, so tests ultimately have to be conducted in animals before human testing can occur. In some cases, drug candidates that may have worked safely and effectively in humans are discarded in the process.

These limitations to current drug testing procedures pointed to a significant, near-term market for Aspect Biosystems. With the capacity to print 3D living tissue models, Aspect could potentially greatly accelerate the pre-human testing phase of drug development. Diseases could be more accurately expressed in such a “biomimetic” environment, as well as the response of cells to drugs. Drug interactions with other parts of the body could be investigated by printing those parts (e.g., kidney tissue) in 3D and testing the effect of the candidate drug upon them. “With 3D printing we could create a portfolio of tissue models,” Walus says, “to measure interactions with other body mechanisms.” In the future, animal testing could potentially be avoided altogether.

The Aspect team decided to focus initially on diseases of the airway. Dr. Sam Wadsworth had developed a 3D tissue model of the human airway as a postdoc at UBC, and the Aspect team realized it could improve it using its 3D printed tissue technology. This would enable modelling challenging related diseases, including airway fibrosis, where uncontrolled scarring can cause the patient to suffocate, often within 5 years of diagnosis. This disease involves complex interactions between multiple cell types in the 3D tissue that are not accurately reproduced in 2D. At present, the disease can be slowed with available drugs, but not stopped. As Walus states, “there are over 100 cures for airway fibrosis that work in a mouse that don’t work in humans, which demonstrates the weakness of the available animal models.” The Aspect team got to work and produced two human airway tissues, one that could be used to model fibrosis and another that models contraction of the smooth muscle surrounding the airway in, for example, an asthma attack. The unique “lab-on-a-printer” technology they have developed is used to mix and print the correct proportions of cells, extracellular matrix, and growth compounds so that the 3D printed cellular construct grows once the printed tissue is placed in an incubator, and develops an accurate physiological structure and biology. The team is working to validate that the airway’s biological function and the disease mechanism are both expressed, so an array of drugs can be tested on any number of airway models. Eventually, the patient’s own cells could be used in the model, paving the way for personalized treatment. Conceivably, a cancer patient’s tumour could be replicated in order to tailor chemotherapy to the patient and minimize side-effects.

The discipline instilled by the Lean Launch Pad to develop a business model based on customer need, rather than technology push, has paid off well for Aspect Biosystems. In April 2014, they placed second in the BC Innovation Council’s New Ventures Competition with a prize of $55,000. They later received significant funding from the UBC Seed Fund administered by entrepreneurship@UBC as well as support via the Industrial Research Assistance Program (IRAP), which helped them secure one of the top 10 pharmaceutical companies as a customer and advance their technology. The company recently won the 2015 StartUp Canada award for Innovation in BC and closed a larger seed round of funding. They are using this recent funding to create a benchtop version of their printer, which they expect to deliver to academic labs in 2016. Walus believes that “by getting our printing technology into key academic labs, we will accelerate the development of 3D tissue printing and ultimately the significant benefits to society.”

Like many other UBC startups, the Aspect team has a “moonshot” goal, which they hope their current business model will help them to achieve. “In the long term,” Walus says, “we hope to be able to print functional human organs, using cells from a biopsy as well as stem cell technology.” Printing implantable organs is perhaps 10 to 15 years away, as it requires extensive regulatory approval and ethical review. But it’s the sort of aspirational goal that can be expected when professors launch a business. It’s something that the people at entrepreneurship@UBC can help make a reality.

2014: places second in BC Innovation Council’s New Ventures Competition with a prize of $55,000.

2014: receives significant funding from the UBC Seed Fund and secures one of the top 10 pharmaceutical companies as a customer.

2015:  wins StartUp Canada award for Innovation in BC; secures larger round of seed funding.

2015 & 16:  selected as an “Emerging Rocket” in the Rocket Recognition Program run by management consulting firm, Rocket Builders. Recognizes great potential for investment and market breakthroughs in the coming year.

2016: BC Tech Association names Aspect “most promising startup” at the 2016 Technology Impact Awards