It's about to change the future. Article by Chris Petty.

If you happen to pass the block bounded by Thunderbird Boulevard and Wesbrook Mall on UBC’s Vancouver campus, take note: you are experiencing history being made.

That block is being transformed into a solar- and hydrogen-driven Smart Energy District, the first project of its kind in the world. It will be developing and testing technologies in a real-world setting, with the goal of providing zero-emission power from sunlight and hydrogen.

Under the direction of Walter Mérida, professor of mechanical engineering and lead of MéridaLabs, the site will include an advanced solar array on top of the existing parking garage, a water electrolyser to produce hydrogen, a hydrogen fueling station for cars and buses, and a bi-directional charging system for electric cars. The project is funded by both private and government sources, and is slated to be up and running by late 2023.

The water electrolyser extracts hydrogen from water using electricity from the solar array and stores it under pressure. This “green” hydrogen (as opposed to “blue” hydrogen, which is extracted from fossil sources) can then be used to produce electricity in a fuel cell or used directly as a fuel in space-heating or automotive applications. The emission from such uses is simply water. 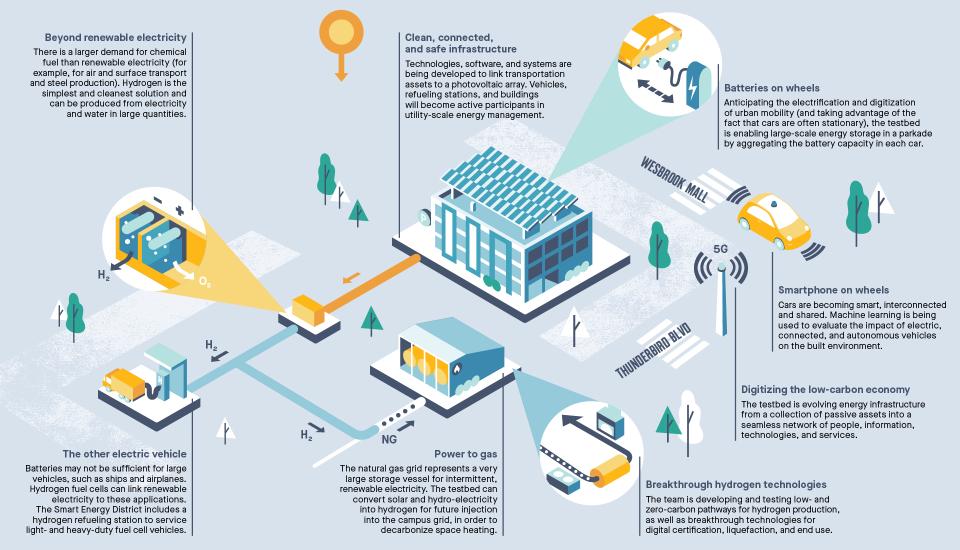 Hydrogen as a fuel is also attractive, because it can enable geopolitical stability and energy security. A city-scale testbed.

Affordability, however, is an issue with using hydrogen as a source of power. While it is the most abundant substance in the universe, extracting it from water is a costly process.

“It is still expensive,” Mérida says. “But, in an era of $100 plus for a barrel of oil, it’s not as prohibitive as it was. Costs are coming down drastically as the technology develops. Rapid learning curves for wind, solar, and fuel cell technologies have been accompanied by dramatic cost reductions in the last two decades. The same will happen with hydrogen.”

Hydrogen as a fuel is also attractive, because it can enable geopolitical stability and energy security. As the recent invasion of Ukraine has made clear, dependence on energy sources in politically unstable areas of the world can have disastrous results.

While hydrogen may well be the fuel of the future, technologies need to be developed to harness its potential. To that end, the Smart Energy District will serve as a research platform to test ideas for feasibility and potential economic development. Technologies that emerge will generate economic opportunities much like those generated by the development of renewable energy technologies. 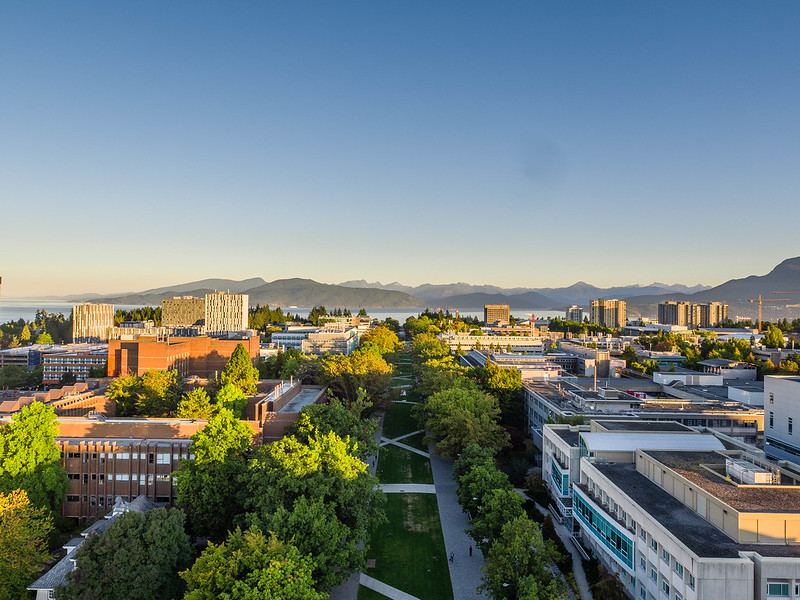 As digital, civil, and energy infrastructures become smart and interconnected, it will be possible to deliver services that minimize environmental damage, promote geopolitical stability, and enable economic diversification.

The bi-directional charging system, for instance, which uses batteries in electric cars to both store and distribute energy, enables municipalities to use parkades for city-scale energy storage. In future stages of the project, injecting hydrogen into existing heating systems to replace natural gas has the potential to dramatically reduce carbon emissions. At UBC the natural gas boilers at the Campus Energy Centre, which was already on the project site, provide a significant portion of the heating needs of the university. Using hydrogen as part of that system would have significant impact on UBC’s carbon footprint.

The digital system under development to manage the project is also revolutionary, and will take advantage of the campus’ 5G wireless network. It will oversee every aspect of the project, all the way from generating and storing hydrogen to processing parking fees.

As digital, civil, and energy infrastructures become smart and interconnected, it will be possible to deliver services that minimize environmental damage, promote geopolitical stability, and enable economic diversification.

As the project proceeds, and it’s shown that hydrogen can provide pathways to net-zero energy systems, Mérida sees a bright future ahead. He is in talks with municipalities and corporations around the Lower Mainland and across the country about adopting technologies that develop out of the project.

“We don’t have 100 years to change our energy system,” Mérida says. “We have, at most, two or three decades. This project means to accelerate the process by developing systems that are convenient, clean, and affordable.”