A version of this article was originally published on the Department of Civil Engineering website.

Dr. Nemy Banthia, civil engineering professor and a renowned global expert in structural materials, has been awarded UBC’s highest academic honor, the University Killam Professorship. This prestigious appointment acknowledges his exceptional contributions as a teacher, researcher, and international leader in his field.

Dr. Banthia is at the forefront and continues to push the boundaries of knowledge and understanding in concrete materials and structures, fracture mechanics, and sensor development for structural health monitoring. Within UBC Civil Engineering, he has the highest h-index and overall citations, as well as being the most published faculty member. His work at UBC has led to revolutionary advancements in his field and cutting-edge techniques for repairing, strengthening, and rehabilitating bridges, buildings, and dams. He is one of the top 25 “Most Cited in the field of Construction & Building Materials” as per Platinum H-Index.

“I am extremely honored and humbled to be conferred UBC’s highest academic honor, the University Killam Professorship,” said Dr. Banthia, “Winning this award would not have been possible without the inspiration and support I have received from my family, my colleagues and my many graduate students who dedicated their lives towards achieving a collective vision of excellence.” 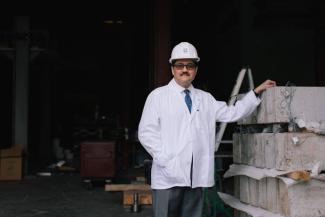 Not only is Dr. Banthia known for his groundbreaking research, he also actively shares and applies his knowledge on a global scale through collaborations and partnerships. He leads the Canada-India Research Centre of Excellence (IC-IMPACTS) as its Scientific Director and CEO. Under his leadership, IC-IMPACTS is now a gateway for multi-sector engagement between Canada and India with the goal of improving the quality of life of communities in both countries. To date, the consortium has placed more than 29 technologies in resource-limited communities, completed 74 joint Canada-India projects, published over 1,000 peer-reviewed papers, trained more than 900 graduate students, and launched eight start-ups. Many of the technologies developed by IC-IMPACTS in water, health, food security and housing have been placed in Indigenous communities in Canada.

Dr. Banthia is respected internationally for his commitment to excellence. He holds prominent positions on the external advisory boards for several leading universities around the world and his expertise and opinion on matters of promotion and tenure are sought after by universities in more than 31 countries. Furthermore, Dr. Banthia regularly serves on grant review committees for numerous international granting agencies.