With the current price of gasoline, it’s no wonder electric vehicles (EVs) are becoming more common on the road.

Despite their growing popularity, researchers are still working to develop a smaller, longer-lasting battery to power EVs. Current battery research at UBC Okanagan has led to additional funding from industry partner Fenix Advanced Materials to lead the charge when it comes to battery development.

The new batteries, which could extend an EV’s driving range and safety, are made of raw and recycled materials procured by Fenix in Trail, BC.

“Our province has a wealth of these materials, and we need to solidify our research and development to ensure we put these materials to good use,” he adds, explaining the batteries use tellurium, a copper by-product, iron and other base-metal-rich ore bodies.”

This expanded partnership with Fenix is an important step toward building a battery supply chain locally while strengthening the Canadian company’s international position in the growing battery market, Dr. Liu explains.

“This research aims to develop a battery that doubles the energy density of today’s lithium-ion batteries while at the same making considerable improvements to its safety,” says Dr. Liu, an Associate Professor in the School of Engineering. “We replace flammable liquid electrolytes in lithium-ion batteries with air-stable solid electrolytes in the new battery chemistry, therefore avoiding the safety risks of current EV batteries”. 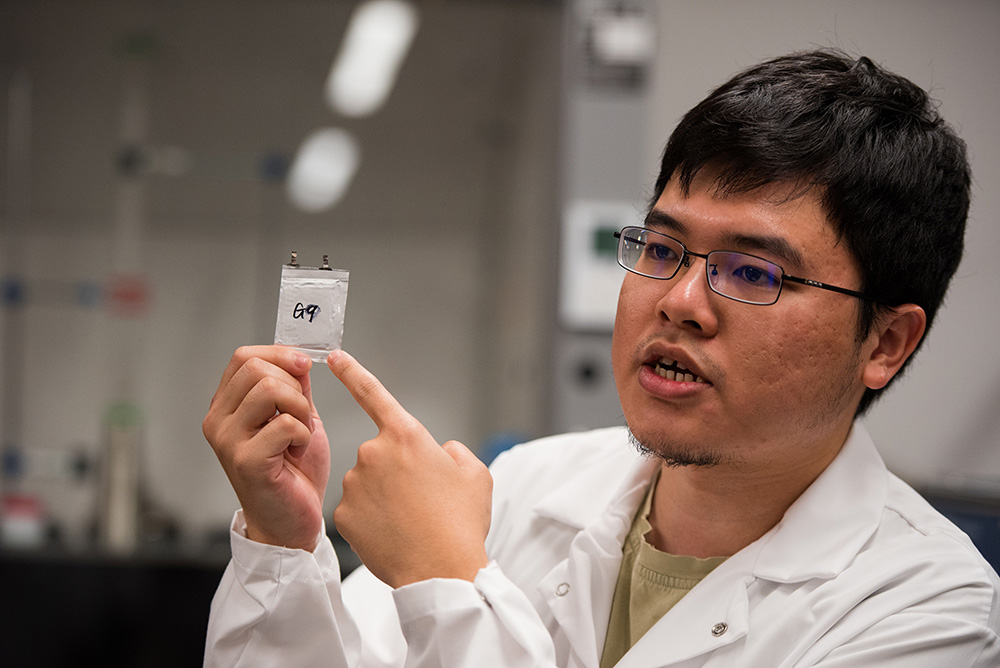 UBCO master’s student Li Tao holds up an example of a pouch cell. Once up and running, the new pouch cell facility will bridge the gap between fundamental academic research and applied research in battery technologies. Michael & Suzanne Hintringer Photography.

Integrating an all-solid-state configuration into EVs removes some of the drawbacks of existing liquid electrolytes-based batteries that are less efficient and diminish rapidly over time, he explains.

Tellurium has high electrical conductivity and a high volumetric capacity—meaning it can help create small, but powerful batteries. The collaboration with Fenix will ensure Dr. Liu and his team have the materials to conduct their research.

“This partnership with UBCO has played a key role in helping to uncover some exciting innovations in new battery technology and other clean technology solutions, and we are thrilled to take this next step,” says Fenix CEO Don Freschi.

Liu says once scientific and technical gaps in the design, fabrication and integration of these materials into solid-state batteries are addressed, these new batteries will have a huge impact on the EV industry.

Fenix is contributing an additional $1-million over the next year to establish a Pouch Cell Facility at UBCO. Pouch cells are wrapped in aluminum cases and differ from other battery formats including cylindrical or prism-shaped cells, both used in EVs, and coin cells which are commonly found in watches, explains Liu.

“We chose pouch cells because they are relatively easy to manufacture compared to cylindrical and prismatic cells,” he says. “The battery testing data obtained from pouch cells are recognized and accepted in the battery and EV industries. In contrast, battery testing data from coin cells are mainly for academic research and are insufficient to influence battery and EV companies.”

Freschi says Fenix and their investment group, NEXT Lithium, are thrilled to support these projects and are preparing to commercialize many of the products developed from these efforts.

Dr. Liu explains that currently, there is no university-based battery prototyping facility in western Canada. Building the pouch cell facility at UBCO will bridge the gap between fundamental academic research and applied research in battery technologies.

The research will result in a smaller, safer and less expensive battery to accelerate transportation electrification. It also helps the shift from a fossil fuel-based economy to decarbonized energy.

“For a long time, solid-state batteries were considered more demanding to produce, but research in this area is establishing new methods that are bringing these batteries closer to the market,” explains Liu. “We are excited to continue to partner with Fenix, Mitacs and other stakeholders, including the Pacific Institute for Climate Solutions and National Research Council, to make stronger, safer and more efficient batteries.”