Raye is the first autonomous, robotic sailboat designed by students to cross the Pacific.

Editor's note: After an unsuccessful launch attempt in Victoria due to technical and weather challenges, Sailbot announced on September 12 that Raye’s launch is now rescheduled for summer 2023..

Get ready for the next leap forward in autonomous driving—on the water. Raye, an 18-foot-long autonomous sailboat (or ‘sailbot’), is expected to launch on her maiden voyage from Victoria, BC to Maui, Hawaii this upcoming week.

Built and developed by passionate students from the UBC Sailbot engineering design team, Raye will navigate and sail 2,308 nautical miles (4,274 km) across the Pacific Ocean, without a human crew.

“This has been a real labour of love, creativity and innovation by over 200 engineering students in the last six years,” said Asvin Sankaran, student co-captain. “We’ve successfully tested Raye on land and in water, and are really excited to send her off.” 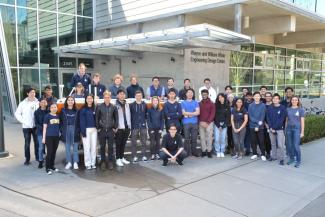 Learning from the past

Raye represents the culmination of lessons learned from multi-year wins at the International Robotic Sailing Regatta on lakes, as well as the team’s first attempt at an ocean-bound autonomous vessel.

UBC Sailbot launched Ada—named after the world’s first computer engineer Ada Lovelace—in 2016 with the aim of crossing the Atlantic. She tragically met her demise when a hurricane hit, her rudder failed, and she was thought lost at sea.

A year later, to the team’s enormous surprise, the R.V. Neil Armstrong called: Ada had been found and would be returned.

“Taking Ada’s design successes and failures, we were able to redesign most of Raye’s components, such as putting in dual rudders, a stronger carbon fiber hull, and new local and global pathfinding algorithms,” said David Alexander, student co-captain.

The changes in this iteration of the team’s sailbot demonstrate new possibilities for the marine industry. The development of self-sailing vessels promises new and improved navigation tools, collision avoidance systems, and to automate surveillance (reducing the number of vulnerable humans in dangerous situations at sea). 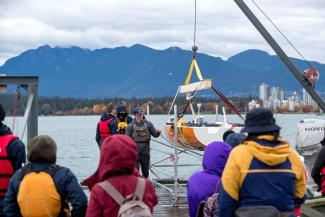 Fittingly, Raye is named after the late Raye Montague, the first naval architect to use a computer program to generate a rough draft of a ship within 19 hours—compared to the industry’s then-standard of two years on paper.

“Raye’s life is an incredible story of hardship, dedication, and perseverance,” said Ashley Chang, mechanical project lead for UBC Sailbot. “Being an African-American female engineer in the US Navy was a tremendous challenge in the 1950s. And to have overcome those obstacles and revolutionize the naval engineering industry, she is truly inspirational, especially for young women in STEM.” 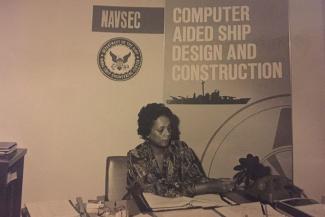 The team wrote to Montague in 2018 for permission to name the boat after her and were delighted to receive her blessing, a few months before her passing.

“She asked me to convey her sincere appreciation to you all and asked me to emphasize this means a great deal,” Montague’s son wrote. “She said that in those days long ago it was difficult for many to visualize the importance of numerical control and the plethora of robotic applications.

“Her words were ‘...this recognition makes me feel like all that work was worth it.’”