From adversity to innovation

In the summer of 2017, Michael Ko received some heartbreaking news. His older brother, Daniel, who has muscular dystrophy (MD), had gone into cardiac arrest. After he was rushed to the hospital and stabilized in the ER, Daniel spent four months in intensive care, slowly recovering from the ordeal. But it left him bedridden and with impaired speech due to a tracheostomy.

A first-year UBC engineering student at the time, Michael dropped his summer courses to help his family. Daniel had been diagnosed with MD as a child and needed a wheelchair by the age of eight. But now he faced a whole new set of challenges: besides being speech-impaired and confined to bed, he could not breathe or eat without tubes, and a life support device kept him alive while he slept.

That fall, Michael began his major in engineering physics. As he sat in class, learning more about the process of transforming engineering ideas into practical technologies, he began to wonder if he could build something that would improve Daniel’s quality of life. By the end of the year, he knew what that something could be: an assistive AI device which would enable Daniel to control the electronic devices in his room.

“[Daniel] had been struggling to turn on the lights or music, and existing voice recognition software had trouble recognizing his words,” says Michael. “So even though I had no background in programming or electrical engineering, I thought I would try to design a device that could help solve this problem.” 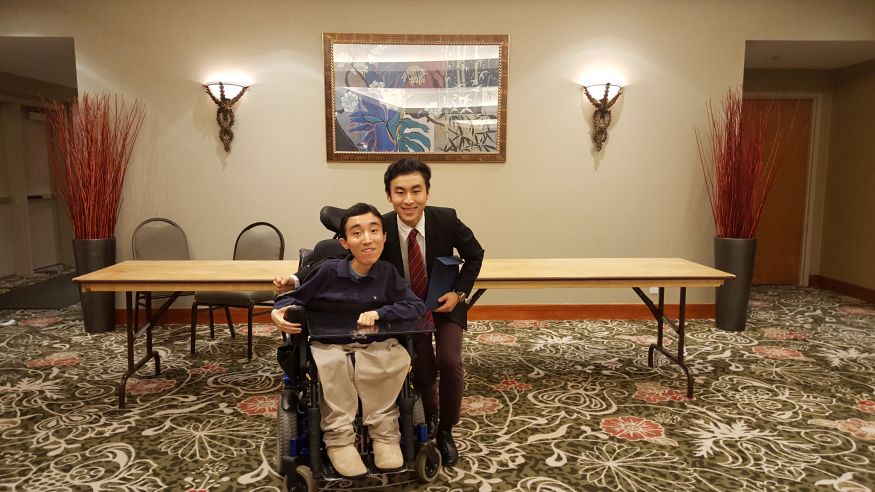 “It was very exciting and gratifying to watch my brother use something I’d created to make his life more enjoyable,” says Michael. “I’m really grateful to my professors for inspiring and encouraging me through this project, and thankful to everyone who has supported me throughout the past year.”

Michael always planned to optimize and expand the capabilities of his technology, but with a full academic schedule — he is currently enrolled in six courses and a lab — it hasn’t been easy to find the time. Over the winter break, however, and with the help of online guides and tutorials, he was finally able to implement some new features. Daniel can now use the device to make phone calls through an external module. He can also access Google Assistant by saying a certain keyword instead of “Hello Google” or “Okay Google” — phrases he is unable to pronounce clearly enough for the Google Voice Search interface to recognize.

As for the next stage of the project, Michael is considering incorporating computer vision technology into his device. Whether or not he does will depend on the progression of Daniel’s health and his changing needs.

Although he originally embarked on this project to help Daniel accomplish simple daily tasks, Michael grew to realize that it was something he wanted to pursue not only for his brother, but also for people in similarly difficult situations.

“I hope my project will encourage those like Daniel,” he says, “and that it will motivate others to take a step forward and solve other real-life challenges in the world today."

EngPhys students build a solid foundation in applied physics and a blend of electrical and mechanical engineering, while gaining extensive engineering design experience.

Take Your Next Steps